It was a misty start as participants arrived at Glencree last Monday morning the 5th of December to meet and hear the visiting archbishop in Jerusalem, His Grace the Most Revd. Dr. Suheil Dawani, who was in Ireland at the Invitation of our own archbishop of Dublin the Most Revd. Dr. Michael Jackson. Those in attendance included guests from Ireland, Northern Ireland and Britain. The event had been in the planning since early August when Archbishop Michael Jackson invited Will Devas and his team into Church House in Dublin to scope out what a day in Glencree could offer in terms of an experience of dialogue and peace-making over the past two decades. Initial discussion produced a number of ideas around how the day might be structured including the ambitious suggestion of a declaration calling for peace and respect towards the dignity of the human person across the Middle East.

Work began on framing the day around three themes, the first was to honour the presence of Archbishop Dawani and to demonstrate a deep sense of solidarity with him at this time. The second was to share some of the experiences that we have had in our own journey out of violence into a much better yet nonetheless imperfect place in Ireland. The third theme was to create a discussion around some of the language that we need to develop with sensitivity to our own and other communities as we struggle to create the conditions for an end to violence and the start of a reconciliation process between communities who remain in conflict. The final part of the day envisaged the signing of the Declaration by all of the Faith Leaders and Religious that would be presented to Archbishop Dawani with copies kept by Archbishop Jackson and Glencree.

The day itself saw guests and participants including His Excellency the Apostolic Nuncio to Ireland Archbishop Charles Browne, the Israeli Ambassador Ze’ev Boker and Ms Jilan Abdalmogid Chargé d’Affaires for the Mission of the State of Palestine. Also present was Rabbi Zalman Lent along with the leaders of the three main mosques in Dublin representing Sunni and Shia Islamic traditions. Dr Bill Mullally President of the Methodist Church in Ireland as well as Fr. Damien McNeice who is Master of Ceremonies for the Dublin Archdiocese was also present throughout the day. Other participants included Paul Manook from the Armenian Church in Ireland along with his colleague Mrs. Aida Lundon who are the key representatives here in Ireland.

The Glencree Chairperson Barbara Walshe opened the proceedings with a welcome to all of those who travelled and were present, and expressed the hope that the day might be of some value to the guests and would give some inspiration through the experiences that would be shared. She stressed that the success of Glencree had been its unwavering commitment to reaching understanding through dialogue and that the humanising experience of exchanging ideas with those who are opposed to and different from you created bonds that transcended the basis of often-mistrustful relationships.

The key session entitled “exploring parallel journeys out of violence into a brighter future” had a pivotal impact on the participants and brought home to everyone the destructive and corrosive impact that violence has on people, communities and generations who are exposed to it. The pain and impact of the violence expressed by each of the four contributors from Ireland, Northern Ireland and Britain acted, as CS Lewis once wrote, like “a megaphone to rouse a deafened world”. Each in turn followed with a description of how they had made their individual journeys forward, from the awful experience(s) that changed their lives forever.

In the afternoon, there was an open discussion that reflected on the experiences of those journeys and the milestones within them from the previous session. There were some very useful and thoughtful contributions around the role of faith leaders today and how they speak and use their voice to reach communities in a way that fosters a curiosity for understanding those who differ from us, and reconciling that which divides us. Archbishop Jackson asked us to be open to the possibility of the prophetic over-gesture in our efforts to reach out and to hear what might be on offer to us by way of a conversation.

The day closed with Glencree Chief Executive Will Devas thanking everyone for creating and participating in what had been a very special day. He said “it was a privilege to bring to Glencree political, religious and community representatives to talk and listen to each other about the challenges of building peace and to facilitate Irish Faith Leaders in making a joint declaration for peace and respect for the dignity of human life in the Middle East”. Following his remarks both Faith Leaders and Religious were invited to sign three copies of the declaration one copy of which was given to Archbishop Dawani to take home to Jerusalem. It was signed by 17 Representatives of the Abrahamic Faiths (Judaism, Christian, and Islam) from across the country. A crowning achievement following an extraordinary day.

Those that signed the declaration were:

The Most Revd. Archbishop Michael Jackson – Archbishop of Dublin, Church of Ireland

Dr. Susan Hood – Librarian and Archivist of the RCB Library 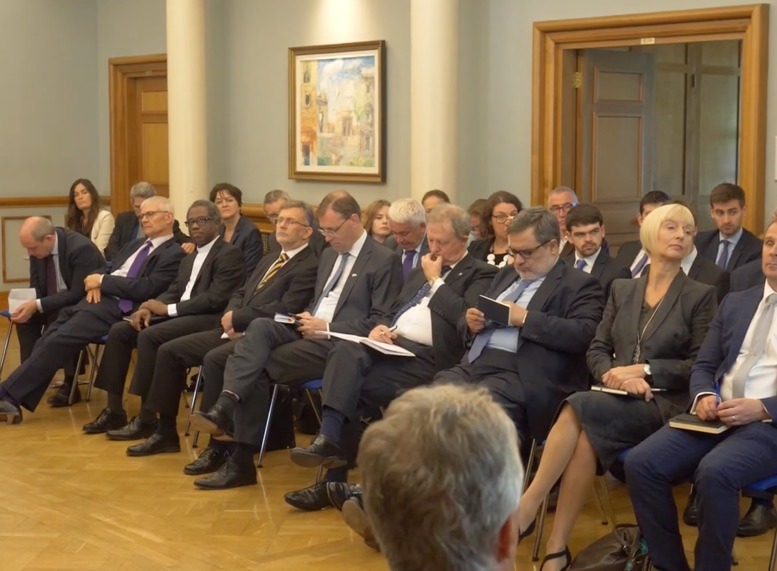 10/9/19: Attended by 27 EU Ambassadors, the latest in Glencree's Ambassador Dialogue Series focused on the impact of Brexit on British-Irish relations and in particular a possible hard border across the island with submissions from Former Taoiseach Bertie Ahern and Former First Minister Peter Robinson.
Do you like it?
Read more 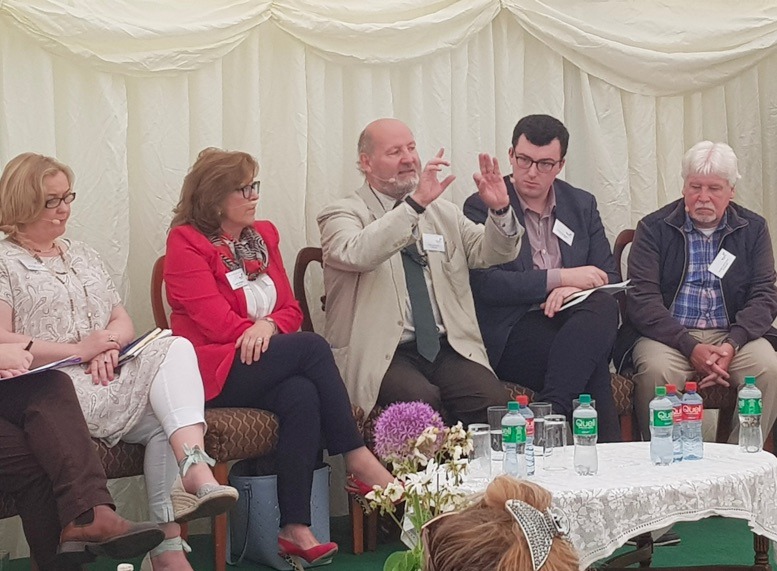 22/6/19: Glencree's 2019 Annual Summer Event centered on the theme of ‘Common Good, Common Ground’ in which the issues and concerns of people from across the island of Ireland were examined.
Do you like it?
Read more 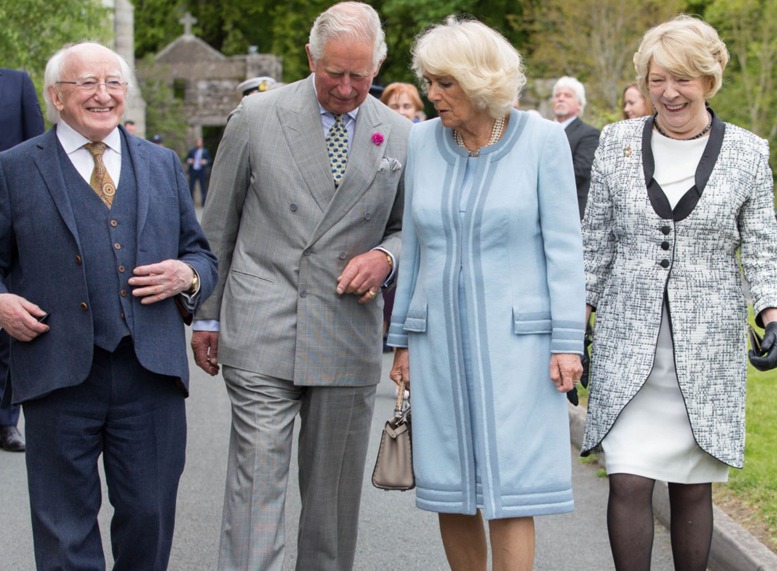 Celebration of Peace during Royal Visit to Glencree

20/5/10: HRH Prince Charles returned to Glencree to unveil a commemorative poem engraving with His Excellency President of Ireland Michael D. Higgins. Leaders from cultural, educational, political and business sectors also marked this special event.
Do you like it?
Read more

2/4/20: A total of 25 Abstracts have been accepted for the Joint Academic Journal to be published by Glencree, under the Peace IV Programme, in collaboration with the Irish Centre for Human Rights at NUI Galway. The Journal will be launched at an Academic Conference in November.
Do you like it?
Read more
Categories

24/3/20: Updates and arrangements following the advice of the Irish Government regarding the evolving Covid-19/Coronavirus situation.
Do you like it?
Read more
Categories

16/6/20: Glencree Chair, Barbara Walshe talks about Glencree’s work and the prospect of Irish unification in an interview with well-known Australian radio host Phillip Adams on ABC Late Night Live.
Do you like it?
Read more
Categories

20/2/20: Glencree team attend reception hosted by President Michael D. Higgins, Patron of Glencree, for the Permanent Representatives of UN Member States
Do you like it?
Read more
Categories

20/2/20: If you are committed to working through the challenges arising from our violent past, are highly organised and efficient with the personal skills to work on a project that touches on some of the most contentious issues that remain in building sustainable peace, we would like to hear from you.
Do you like it?
Read more
Categories

7/2/20: We are seeking a dynamic, energetic and positive person to join our administrative team. You will work within a team designed create and manage dialogue opportunities between political, government official and diplomatic actors from across the island of Ireland, Great Britain and the EU.
Do you like it?
Read more
Load more
Categories

It was a misty start as participants arrived at Glencree last Monday morning the 5th of December to meet and hear the visiting archbishop in Jerusalem, His Grace the Most Revd. Dr. Suheil Dawani, who was in Ireland at the Invitation of our own archbishop of Dublin the Most Revd. […]
Do you like it?
Read more
Corporate Peace Partner
Champion the cause for peace
Become a Member
Have a voice
Donate
Support Peace
Follow us on
Stay up to date, help spread the word