Celebration of peace at royal visit to Glencree

Celebration of peace at royal visit to Glencree

‘I will house peace’ she says, ‘a prince will come from Wales to do me honour and I shall blend the  echoes of Welsh soldiers with sounds of children’s laughter and the distinctive accents of the North’.

A celebration of peace took place today, 20th May 2019, in the Glencree Centre for Peace & Reconciliation (Glencree) to mark the return visit of HRH The Prince of Wales accompanied by HRH The Duchess of Cornwall.  President of Ireland Michael D. Higgins and his wife Sabina welcomed the couple. 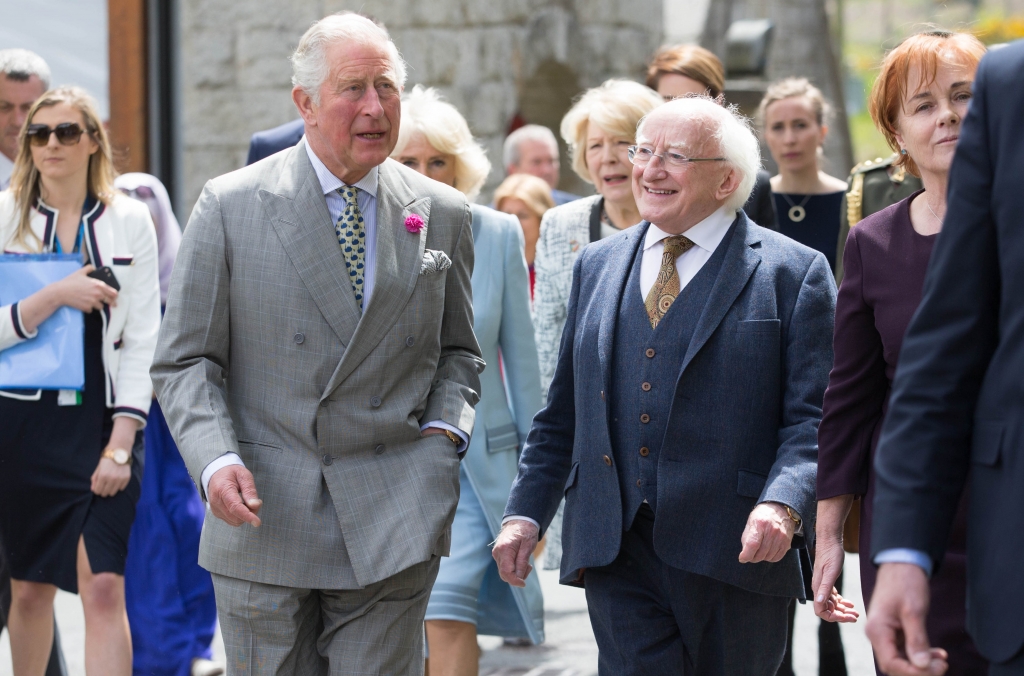 Official visit to Ireland by H.R.H The Prince of Wales & H.R.H The Duchess of Cornwall on 20th May 2019.

The visit was also attended by leaders across civil society. A poem written by the late founding member of Glencree, Una O’Higgins O’Malley and written to honour The Prince’s 2002 visit was read to the audience by young people from three schools working with Glencree. After the recital, a specially commissioned engraving of the poem in Wicklow granite was jointly unveiled by His Royal Highness Prince Charles and President of Ireland Michael D. Higgins.

Speaking at the event, Barbara Walshe, Chair of Glencree said: “The symbolism of today’s event, reminds us of how deeply entwined our countries are, physically, socially, economically, culturally and historically. While much of this history has been acknowledged as difficult and has given rise to conflict, we have found that an answer lies in the restoration of relationships through dialogue.

Despite the recent fractures, our work is to maintain and develop those relationships in times of tension. What we have learned over the last forty years at Glencree, is the necessity to build or sustain relationships through dialogue in quiet, confidential spaces. There is then the prospect of the transformation of those relationships into something enduring which transcends difficult situations”.

The event at Glencree, the first in a series of events on a visit to Ireland by HRH The Prince of Wales and HRH The Duchess of Cornwall, showcased a series of key programmes run by Glencree. The highlighted programmes spanned the areas of Women in Leadership, Legacy and Young Peacebuilders. At today’s event three closed sessions, one covering each programme area, were jointly visited by HRH The Prince of Wales, HRH The Duchess of Cornwall, President of Ireland Michael D. Higgins and Ms. Sabina Higgins. Each session enabled the participants to share their experiences of conflict, peace, reconciliation and their hopes for the future.

Also speaking at the event, Naoimh McNamee, CEO, Glencree said: “Many unlikely and transformative conversations have happened here in Glencree. Many courageous people from across the islands have come here, sometimes at risk to themselves, to be challenged and to challenge the difficult narratives that have characterised our history. That had a powerful transformative effect on how we saw each other but perhaps most fundamentally how we learned to speak to each other. This event today symbolises language in the present and the presence of HRH The Prince of Wales with President of Ireland Michael D. Higgins here in Glencree speaks to the progress that can be made when people learn to speak to each other in a spirit of generosity. Today with the return visit of HRH The Prince of Wales along with Glencree Patron, President of Ireland Michael D. Higgins, Glencree honours the past and looks with confidence to the future.”

The event was attended by pupils and teachers from three schools working with Glencree on improving the understanding of young people about British-Irish relations.  Students and their teachers from St Colmcille’s Community School (Wicklow / South County Dublin), St Louis Secondary School for Girls (Dundalk), and New-Bridge Integrated College (Banbridge, NI) shared their reflections and the future relations across these islands.  As part of the event, students from the three schools recited the poem ‘The Old Barracks at Glencree’ (full text below) to the assembled guests.

Glencree Centre for Peace and Reconciliation has been a consistent force for peace on the island of Ireland since it responded initially to the vicious outbreak of violence in the North of the island in the early seventies. Over the last forty years it has maintained its founding ethos, that of facilitating difficult, quiet conversations when they are needed.

The enduring peace in Ireland, the thousands of lives saved by that peace, not to mention the jobs, hope and prosperity it has brought must never be taken for granted and must never succumb to violence or the threat of violence again.  Glencree remains a special place, a place where impossible conversations become the reality that leads to a peaceful present and a peaceful future.  Glencree has always looked outward and we will continue to share our experience of peacebuilding through dialogue with groups in need of support here in Ireland and around the globe.

Glencree (www.glencree.ie) was established in 1974 and works tirelessly to promote peace, reconciliation, and inclusivity on the islands of Ireland and Britain.  Since 1974, Glencree has engaged in practical peacebuilding and reconciliation in Ireland, North and South, and more recently, internationally. We work with former combatants, community leaders, victims/survivors, politicians, faith groups, young people and women. We aim to transform violent conflict with sustainable peaceful methods by including and respecting all stakeholders.

Today Glencree’s main work and focus is on:

Glencree is supported by the Dept of Foreign Affairs through the Reconciliation Fund, the Office of Public Works, The Tony Ryan Trust its members and friends.

In June 2015, President of Ireland Michael D. Higgins gave the opening address at an event in Glencree entitled ‘1916 and the Ethics of Memory’. The full text of the speech is available here: https://www.president.ie/en/media-library/speeches/1916-and-the-ethics-of-memory

The Old Barracks at Glencree

And gazes down the valley

Hugging a dream that no one can measure;

One day she will be filled again, she knows,

Though clamorous rooks make nurseries in her hair

and the prying sky gapes in through rotting rafters.

‘I will house peace’ she says, ‘a prince will come from Wales to do me honour and I shall blend

the echoes of Welsh soldiers with sounds of children’s laughter

and the distinctive accents of the North’.

And so, she dreams in solitude and silence,

Confident of her appointed destiny.

About the Author: val