Glencree Journal: The Role of Women in Peacebuilding #UNResolution1325

LOYALIST WOMEN HAVE A VOICE – BUT WHO’S LISTENING? 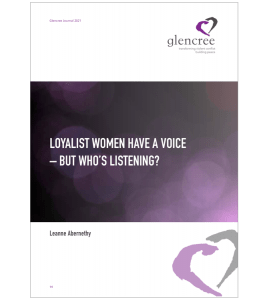 The United Kingdom is on its 4th National Action Plan for Women, Peace & Security, while Ireland is currently delivering its 3rd National Action Plan (which references Northern Ireland). The year 2020 marks two decades of UN Security Council Resolution 1325 on Women, Peace & Security, however, the CEDAW (Committee for the Elimination of Discrimination against Women) Committee’s Concluding Observations last year expressed concern that the UK Government has not implemented the principles of UNSCR 1325 in Northern Ireland. The women’s sector in Northern Ireland has worked with the Stormont All-Party Group on UNSCR 1325, but the new agreement ‘New Decade, New Approach’ (2020) fails to mention the word ‘women’. Notwithstanding this, there is a marked absence of voices of women in the North Antrim, Londonderry & East Tyrone areas about what they feel – about past, future and current issues, as well as their hopes and fears. This chapter will focus primarily on reflecting the voice of Loyalist/ Unionist women from towns and rural hinterlands. It recognises the value of women in the community and how, despite being a silent voice in the public realm, they play an important role in shaping narrative, understanding and perception. Any strategies concerning the application of the principles of UNSCR 1325 to Northern Ireland need to take account of their concerns, views and potential to influence future trends in loyalism and peacebuilding in Northern Ireland.

WOMEN IN PEACE MEDIATION ON THE ISLAND OF IRELAND: TOWARDS A MORE INCLUSIVE DEFINITION

This paper argues that narrow understandings of ‘peace mediation’ that tend to orientate around formal peace negotiations play a role in perpetuating a lack of recognition of the extensive and crucial role that grassroots women play in peace mediation. Global statistics on women’s inclusion in high-level peace talks demonstrate high levels of gender inequality. A 2016 study shows that between 1992 and 2011 women only made up 2 percent of mediators, 4 percent of signatories and 9 percent of negotiators. However, at the grassroots level, women tend to play vital, yet often unrecognised, roles in peacebuilding, which also utilises meditative practice. In the Irish context, the Northern Ireland Women’s Coalition played a crucial role in the negotiations that led to the Good Friday Agreement and are included in global statistics on women in mediation. Yet those at the grassroots level, who negotiated between, and continue to negotiate between, contentious groups are rarely recognised as mediators. This paper begins with a review of the theoretical literature on women in peacebuilding and mediation, including critiques of the narrow definitions of these fields employed in official documentation and policy. The second part examines empirical evidence from the voices of a diversity of women working in peace mediation from the island of Ireland. Findings show that women working in this area engage in meditative practice in their everyday peacebuilding work, but do not tend to define their work in terms of peace mediation. The paper therefore argues that the way that peace mediation is currently defined and what types of mediation are valued perpetuates the lack of both institutional and self- recognition of women’s work in the field of peace mediation.

About the Glencree Journal 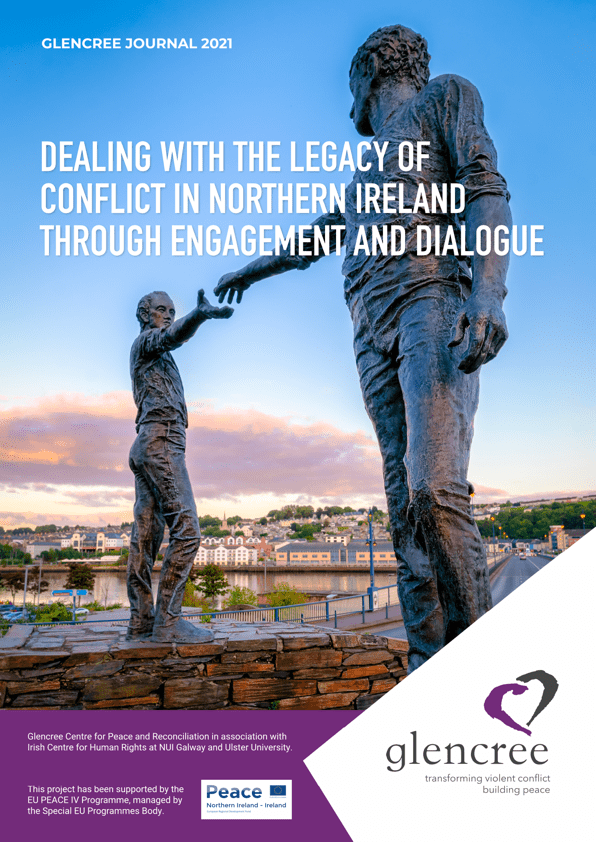 This essay was written for ‘Dealing with the Legacy of Conflict in Northern Ireland through engagement and Dialogue’, a Journal by Glencree in conjunction with the Irish Centre for Human Rights at NUI Galway and Ulster University. The Journal forms part of Glencree’s Peace IV ‘Addressing the Legacy of Violence through Facilitated Dialogue’ project which focuses on creating meaningful, purposeful and sustained contact between victims/survivors groups, and representatives of groups and individuals with differing interpretations of what happened in Northern Ireland’s past. It also aims to create forums to share learnings from these dialogues on a national and International basis.

Featuring contributions from 19 authors, including academics and practitioners in the fields of peace studies and conflict resolution, the Glencree Journal brings a keen focus to many of the issues that are intrinsic to the Peace IV Project. It will also help to inform practitioners in a wide variety of fields of future pathways to sustaining a just and equitable society in a post-conflict situation. The Journal essays were peer reviewed by the Editorial Team led by Professor Ray Murphy of the Irish Human Rights Centre at NUI Galway, Professor Patricia Lundy, Dr Niall Gilmartin and Dr Philip McDermott of Ulster University, and Dr Rory Finegan, Maynooth University and formerly Assistant Manager (2020) at Glencree of the Peace IV ‘Addressing the Legacy of Violence through Facilitated Dialogue’ Project.

More information about Glencree’s PEACE IV ‘Addressing the Legacy of Violence through Facilitated Dialogue’ Project can be viewed here.